Society Members In Other Productions

Three members of Castlerea Musical society are currently preparing to take to the stage with other musical societies. 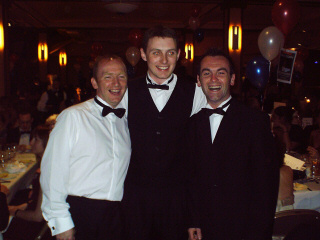 Gerry Miley (above left) and Daniel Doherty (above right) are both rehearsing with Boyle Musical Society for their production of "Hot Mikado". Daniel is playing the part of Poo Bah and Gerry is playing the part of Pish Tush. The show is being directed by Castlerea Musical Society's new director, Frank O'Mahoney. "Hot Mikado" runs from 10th-14th November in St. Joseph's Hall, Boyle.

Meanwhile, Niall Heaney (above centre), is preparing to thread the boards with Encore Theatre Company in Galway. Niall is playing the part of Edward Squires in their production of "Clown". The show is being directed by it's writer, Peter Kennedy and runs from 24th-30th October in The Black Box, Galway.