The society had great success in the AIMS awards for 2004 which were announced on Saturday 19th June. The society won the Spirit Of AIMS/Adjudicator's Special Award for the conditions in which we staged our production of "Cabaret".

Full details of this year's award winners can be found by clicking on the AIMS image or by clicking here.

Castlerea Musical Society were well represented at the recently held VW sponsored AIMS seminar weekend which took place from the 18th - 20th June in the Gleneagle Hotel, Killarney with approximately 17 members joining the 940 others who attended the awards banquet on the Saturday night.

The society were nominated for two awards and were lucky enough to be chosen as winners of one award. Walter Heaney (above, second from the right) was chosen as runner-up for the Best Stage Manager award, with Brian Brady from Athenry M.S. winning this category. However, our luck changed when Castlerea M.S. were announced as the winners of the Spirit Of AIMS/Adjudicator's Special Award. The society was nominated for this category on the basis of "Conditions in which to stage a show". 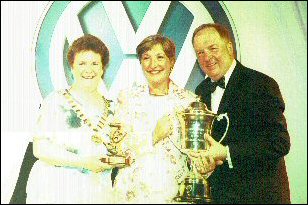 Needless to say, the announcement was met with great excitement from the Castlerea tables as Angela Webb (above) received the trophy on behalf of the society. 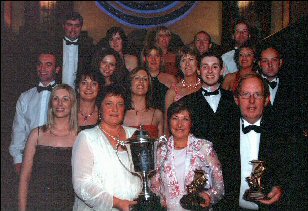 Congratulations must also go to the other AIMS western region and neighbouring societies who also had a successful weekend, namely Tuam, Athenry, Galway, Ballinrobe, Athlone, Sligo, Loughrea, Ballinasloe and Longford.

Photos from the weekend can be found in the "Photos" section.