The nominations for the AIMS Adjudication and Awards Scheme 2004/2005 were announced on Saturday 28th May. They were announced in Dublin by actor, Simon Delaney. For the fourth year in a row, Castlerea have been included among the nominees. Daniel Doherty has received his third nomination, this time in the category of Best Actor for his role of "Bill Snibson" in this year's production of "Me and my girl".

Daniel has been nominated alongside John Drummey as "The King" in "The King and I" with Ennis musical society and Ronan Lardner as "Toby" in "God Bless Archie Dean" with the Marian choral society, Tuam.

Mary Heaney has also received a nomination this year in the Unsung Hero category. This category allows societies to nominate their own candidate who is seen as an unsung hero within the society. 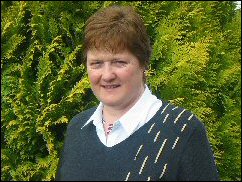 This year six candidates have made the prestigious shortlist and luckily, Mary is among them. The other candidates in the category are Catherine Gunning (Tullamore), Pat McGovern (Ballinasloe), Martin Moore (Athlone), Amy Power (Carrick-on-Suir) and Frances Styles (Clane).

These nominations are an incredible achievement for what is a relatively small society with a limited talent pool and limited resources. This year is the fifth year in the last six that we have been among the nominees. That achievement is only strengthened when one considers that we joined the adjudication and awards scheme in the late 80's and didn't receive a nomination until 2000.

The winners will be announced at the annual awards banquet which will be held in the Gleneagle Hotel, Killarney on Saturday June 18th as part of the annual AIMS seminar.

Congratulations also to the other Western Region and local societies who received nominations on Saturday, namely Athenry, Athlone, Ballinasloe, Ballinrobe, Claregalway, Galway, Galway University, Longford and Tuam. Best of luck to all these and our own nominees in Killarney on June 18th.

A full list of this year's nominees can be found by clicking here.