For the third year in a row, Castlerea Musical Society have won awards at the annual AIMS awards banquet. The winners for 2005 were announced on Saturday June 19th. The society had received two nominations for awards and were lucky enough to win one of them.

Daniel Doherty, who was nominated for the Best Actor award in the Sullivan section for his role as Bill Snibson in our production of "Me And My Girl", beat off some very stiff competition to claim the prize. This is Daniel's second AIMS award, having previously won the Best Supporting Actor award in 2003. This year he was chosen ahead of Tuam's Ronan Lardner and Ennis' John Drummey. 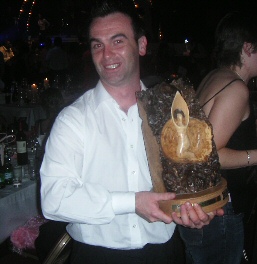 Castlerea musical society were well represented at the VW sponsored AIMS seminar weekend which took place from the 17th - 19th June in the Gleneagle Hotel, Killarney with approximately 22 members joining the 940 others who attended the awards banquet on the Saturday night. 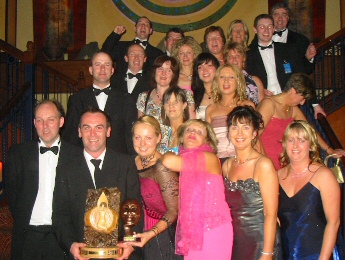 Congratulations must also go to the other AIMS western region societies, Galway and Ballinrobe, who also had a successful weekend. A special word of congratulations must go to Michael Coen from Ballinrobe who won the Best Supporting Actor award. Michael took part in our "Stars in their eyes" fundraiser as Frank Sinatra back in March. 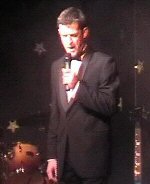 Full details of this year's award winners can be found by clicking here.