Musical fever has once again hit the town of Castlerea with the local musical society in the final stages of preparation for their upcoming production of the children's classic, "Oliver!". Never ones to be content with their current lot, Castlerea musical society have focused on raising their standards further and, to this end, have, for the first time ever, brought in a full-time professional director, Leonard Anderson, to see that the audiences are not disappointed with the society's 37th production. Leonard, who hails from Scarva in Co. Down, has directed shows for countless companies the length and breadth of the country and brings with him an impressive reputation. Along with their first use of a full-time director, the society have also gone out of their way in seeing that the best possible stage and sets are available by making use of a professional set design company from Ennis, Co. Clare. 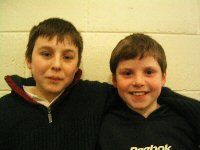 The cast themselves have been hard at work since October to ensure that they are not outshone by the advancements around them. Oliver (Derek Tully), The Artful Dodger (Craig Burke), Fagin (Daniel Doherty - the current AIMS Best Actor), Bill Sykes (Pat Walsh), Nancy (Olivia McGarry) and the rest of the 35 strong adult members have sang, danced and acted their way around rehearsal venues in the town to mirror the work that is being done behind the scenes. Of course, "Oliver!" could not take place without a hard working group of children to join the cast and Castlerea musical society are lucky enough to have such a group. The 20 or so children were selected from a group of over 100 who auditioned back in October and have impressed all with their talent and enthusiasm in rehearsals.

Under the musical supervision of musical director, Morgan Cooke, and chorus mistress, Martina Hawthorne, everyone in the society is eager to get the show off to a flying start on opening night. 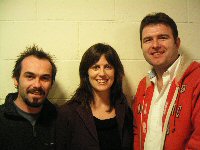 "Oliver!" opens on Monday 20th February in Riverisland Nite Club, Castlerea and runs nightly at 8.30 p.m. until Friday 24th. As booking does not apply, audience members are advised to arrive early as large crowds are expected for the entire run of the show. Tickets are €12 (Mon - Thurs) and €15 (Friday). There is a €10 concession price for students on Monday and for O.A.P.'s on Tuesday and Wednesday.