Society Members In Other Productions

Following the success of our recent production of Oliver!, it has been busy times for a number of our members who are involved with other theatre groups. 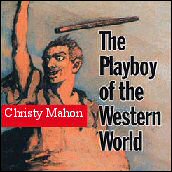 Daniel Doherty (Christy Mahon), Caoilin Bruen (Pegeen Mike), Olivia McGarry (Honor Blake)and Mervyn McDonagh will all take to the stage with Castlerea Drama Group in their production of J.M. Synge's Playboy Of The Western World. The show will be staged in the G.A.A. O'Rourke Centre, Castlerea from Thursday 6th - Saturday 8th April.

Niall Heaney is also preparing to thread the boards with Galway Musical Society as Alan Deluca in their production of A Chorus Line. The show will run in the Town Hall Theatre, Galway from Monday 3rd - Saturday 8th April.

We must also congratulate one of our new members this year, Pat Walshe, who played the part of Bernardo in Dunmore Musical Society's recent sold-out run of West Side Story.