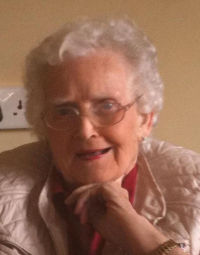 It was with great sadness that the Society learned of the passing yesterday of Margaret Newman, one of the Society's founding members. Margaret was present at that first informal gathering in McDonnell's on Main Street which lead to the creation of the Society, and she would prove to be a stalwart member, particularly during those early, formative years.

Margaret took to the stage for the Society's initial three pantomime productions, beginning in 1968, and again treaded the boards as a member of the chorus in "South Pacific" in 1973, "Calamity Jane" in 1974, "Call Me Madam" in 1976 and "The White Horse Inn" in 1977. Margaret then spent six years assisting the pianist in the orchestra pit, from "Lilac Time" in 1980 to "Finian's Rainbow" in 1985. A lady of many talents, she, along with Josephine Fallon, worked as Chorus Mistresses for "Finian's Rainbow" in 1985.

But Margaret will probably be best remembered for her work during her time as a member of the Society's committee. She first joined the committee as Assistant Secretary in 1973. She took on the role of Secretary the following year, and would remain Secretary of the Society for seven years, up to 1980. She remained on committee for a number of years, overseeing and managing the ticket booking office up into the 90's.

The Society is indebted to those early members for their time and effort, none moreso than Margaret Newman. The Society offers its condolences to Margaret's family, friends and neighbours at this time. May she rest in peace.