There was huge excitement in Killarney on Saturday night last, the 17th June, at the annual A.I.M.S. award banquet where Castlerea Musical Society were announced as the winners of the Best House Management award in the Gilbert section for their production of Dirty Rotten Scoundrels. Needless to say, the approximately 18-strong contingent who had made the long trip down to The Kingdom made themselves heard as Clare Kelly, Front of House Manager, collected the Mary Kitt Trophy on behalf of the Society. 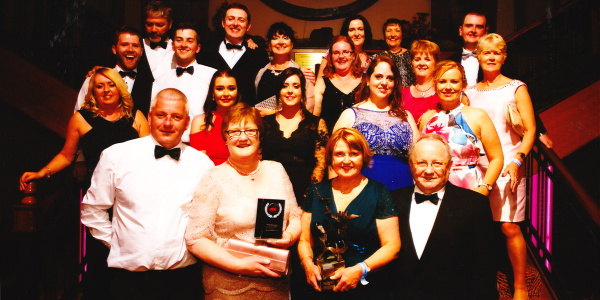 Castlerea were chosen as winners by A.I.M.S. adjudicator, Peter Kennedy, with Carrick-on-Suir Musical Society (Legally Blonde) and Shannon Musical Society (9 to 5 The Musical) the runners-up in the category.

The award is wonderful recognition for Clare and all her Front of House team, including ushers, ticket sellers, car park attendants, refreshments servers, St. Michael's Special School and everyone who had a hand in preparing and running the Front of House area of The Hub, Castlerea for this year's show.

There was also delight amongst the Castlerea gang when our musical director of the past 6 years, Shane Farrell, was announced as winner of the Best Musical Director award in the Sullivan section for Sweeney Todd with Bravo Theatre Group, Loughrea.