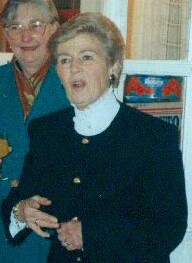 Sad news reached Society members this evening with the passing of a founding member, past President and honorary life member, Deirdre McDermot.

As a founding member, Deirdre took to the stage in the Castle Cinema in 1968 for the Society's maiden production, a pantomime, The Long Ju Ju. She would go on to tread the boards for all but one of the Society's first 15 shows. In the late 70's and early 80's, Deirdre gave her time to the society as a member of both the committee and the make-up team. She returned to the stage again in the late 80's for productions of Rio Rita, Guys and Dolls and Fiddler on the Roof.

In 1992, Deirdre took up the position of President of the Society, a role she held for 6 years through the mid-nineties. During this time, she made her final on-stage appearance with the Society in the our 25th anniversary production, Memories.

The Society extends its condolences to all of Deirdre's family and friends. She will be well remembered by Castlerea Musical Society and its members. May she rest in peace.